Breathtaking blue topaz in halo of twenty four (24) tiny CZs crowned by nine (9) CZs of a more impressive size distinguishes this large cocktail-time pendant. Design of this 585 (14-karat) rose gold pendant is inspired by the times of Catherine II of Russia, a powerful and passionate woman. Her charismatic reign left its mark on the history of the Russian Empire. Despite an implied invitation to travel back in time to the 18th century, this baroque jewel is designed for characterful women of the 21th century.

This pendant is also available with garnet, smoky quartz, or amethyst. 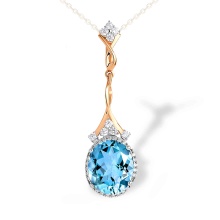