The Holy Apostle Andrew (the first of the Twelve Apostles of Jesus) is intercessor for fishermen and elderly maids and servants as well as all men with name Andrew (Andrey). Saint Andrew is the patron saint of Russia, Romania and Scotland. Commemorated: November, 30 (December 13).

Life of the Saint: Andrew, the son of Jonah and brother of Peter, was born in Bethsaida and was a fisherman by trade. At first he was a disciple of St. John the Baptist, but when St. John pointed to the Lord Jesus, saying Behold the Lamb of God! andrew left his first teacher and followed Christ. Following the descent of Holy Spirit, it fell by lot to the first apostle of Christ, St. Andrew, to preach the Gospel in Byzantium and Thrace, then in the lands along the Danube and around the Black Sea, then in Kiev and Novgorod he planted a Crosses on a high places and finally in Epirus, Greece, where he suffered for his Lord in the year 62. His relics were taken to Constantinople; his head was later to Rome, and one hand was taken to Moscow. 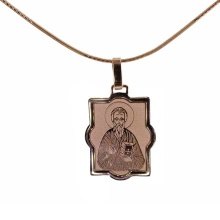