"The Holy Apostle Peter" gold body icon. The design of this icon pendant is inspired by traditional orthodox iconography painting reinterpreted here as a miniature laser hand engraving. This technique achieves delicate nuances of tone and shading by tiny strokes and texturing by laser that blend into an image with beautiful richness of detail. The art of laser miniature engraving by hand calls for exceptional patience and expertise. The reverse of the icon features eight pointed orthodox cross and inscription in Russian "Святой Апостол Пётр" meaning "The Holy Apostle Peter". The icon is made of 585 rose gold in Kostoma city, Russia. It measures 25mm (1 inch) in height (with bail) by 15.5mm (5/8 inch) in width.

Life of the Saint: Peter was the son of Jonah and the brother of St. Andrew the First-called. He was a fisherman from the town of Bethsaida and was at first called Simon, but the Lord was pleased to call him Cephas, or Peter. His love for the Lord was great, and his faith in the Lord became gradually stronger. After the descent of the Holy Spirit, Peter showed himself to be a fearless and powerful preacher of the Gospel. Peter worked many powerful miracles: he healed the sick and resurrected the dead, and the sick were healed even from shadow. In the year 64 AD by the order of the evil Emperor Nero, Peter was condemned to death. Seeing the cross before him, he begged his executioners to crucify him upside down for he considered himself unworthy to die as had his Lord. Thus, this great servant of the Great Lord reposed and received a wreath of eternal glory. 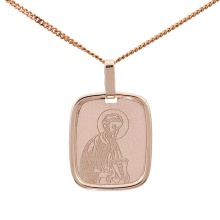