Any Christian cross signifies the Faith in Christ. The composition of this open-worked cross with no any inscriptions on the front side is typical for Christian crucifix made in the Eastern and Central provinces of Ukraine, as well as in the Western areas. It may be considered as either an Eastern Orthodox cross or a Greek-Catholic* cross. This cross may be worn by a woman as well as by a teenager or a man. 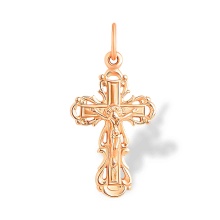