Body icon of the Lord Jesus Christ 'Not Made By Hands' or 'The Holy Mandylion' (in English), 'Спас[итель] Нерукотворный' (in Russian). Laser and diamond cutwork jewelry techniques over matte 585 (14-karat) rose gold. Dimensions: 27mm (1-1/16 inch) in height by 14mm (9/16 inch) in width. It may be considered as either a women's body icon or a children's body icon.

History of the legend: In the time when our Lord preached the Good News and healed every illness and infirmity of men, there lived in the city of Edessa, in Asia, a prince named Abgar, who was completely infected with leprosy. He heard of Christ, the Healer of every pain and disease, and sent an artist, Ananias, to Palestine with a letter to Christ in which he begged the Lord to come to Edessa and to cure him of leprosy. In the event that the Lord was unable to come, the prince ordered Ananias to portray His likeness and to bring it back to him, believing that this likeness would be able to restore his health. The Lord answered that He was unable to come, for the time of His passion was approaching. Instead, He wiped His face with a towel (a piece of cloth) called 'mandylion', and the image of His face remained on the towel. The Lord gave this towel to Ananias with the admonition that the prince would be healed by it. Receiving the towel, Prince Adgar kissed it and the leprosy completely fell from his body. He placed the towel with likeness of Christ with wooden backing, framed in a gold frame, and adorned with gemstones. 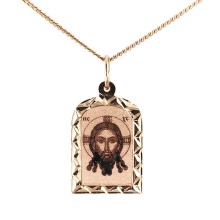