The shape of this cross is typical for Eastern Orthodox crosses made in the Russian North. A master jeweler placed the body of Jesus made of white gold in the spotlight of сompostion. The body of Christ is nailed to the cross with 4 nails. On the bars of the Russian cross one can find inscriptions in Church Slavonic language praising Christ and Christianity: Црь Слвы (Царь Славы-King of Glory), IНЦI (Иисус Назареянин, Царь Иудейский - Jesus of Nazareth, King of the Jews), IC XC (Иисус Христос-Jesus Christ), МЛРБ (Место лобно рай бысть-Skull place is become paradise), the skull at the base of the cross represents the ashes of Adam, whose sins were washed away with blood of Christ on Golgotha. The reverse features an ever-present message in Cyrillic: "Спаси и сохрани" means “Save and Protect”. This Orthodox Cross is an excellent choice for those looking for a christening cross. It may be considered as either a women’s cross or a men’s cross.

Quick Tips
Education: A fundamental difference between Orthodox and Latin Crucifixions is the number of nails used to nail the Son of God to the cross. The Orthodox Christians believe that the feet of Christ were nailed to the cross with two separate nails, one in each foot, and therefore, the Orthodox Canons dictate that Christ’s feet be separated on the cross. In contrast, on Latin crosses, Christ’s feet appear one atop the other, held in place with a single nail. 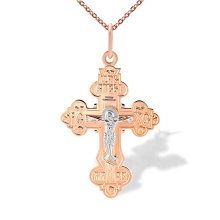