Symbols of faith, salvation, and atonement

Orthodox 'Save and Protect' crosses for men, women and children.

Choose your Orthodox cross pendant or crucifix necklace in New York, Toronto and Montreal at the Golden Flamingo jewelry stores. America's most extensive selection of orthodox cross pendants and orthodox icon necklaces. We are offering the widest selection of Russian Orthodox cross pendants in the USA and Canada. In our stores you can find gold crucifix pendants as well as sterling silver crucifixes. You can buy men's cross as well as cross for women, or cross for baptismal ceremony for children. Due to exquisite details these Orthodox crosses are more than a religious symbols but also a beautiful pieces of jewelry. In fact, one of the oldest forms of the cross, the Orthodox cross is also the form of true Christian cross. The Orthodox cross is also known as Russian cross, Ukrainian cross, Eastern cross, Greek cross, Byzantine cross, Serbian cross, Coptic cross, Georgian cross, Slavic orthodox cross, Patriarchal cross and St. Olga cross. A difference between Orthodox and Latin crucifixions is the number of nails used to nail the Son of God to the cross. The Orthodox Christians believe that the feet of Christ were nailed to the cross with two separate nails, one in each foot, and therefore, the Orthodox canons dictate that Christ's feet be separated on the cross. In contrast, on Latin crosses, Christ's feet appear one atop the other, held in place with a single nail. One more distinguish element is inscription 'Save and Protect' on the reverse of Russian and Ukrainian crosses. Every Christian soul harbors the hope of salvation and in the moments of danger and despair one is asking his Heavenly Father for protection. The simple but especially meaningful words from the prayer 'Save and Protect' on the reverse of the Orthodox cross safeguard a Christian from evil eye and demonic attacks. 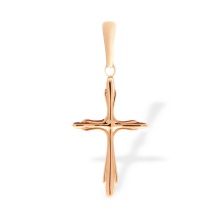 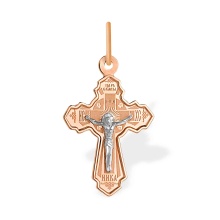 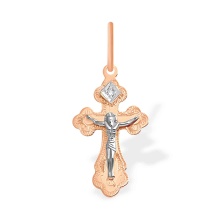 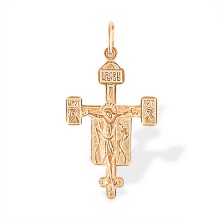 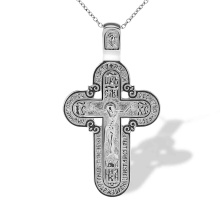 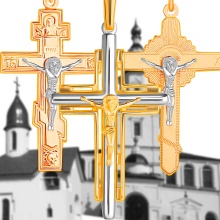 Orthodox and Catholic cross pendants from our collection of gold and silver body crosses.

Every Christian Cross - Is the True Honorable Cross

Of all Christian confessions, only Orthodoxy and Catholicism honor both crosses and icons simultaneously. The cross carries with it a tremendous charge of spiritual energy - it is a symbol of faith, salvation, and atonement. This is why the silver or gold cross pendant worn by every Christian is more than just a symbol - it is viewed as a link between man and God. According to the Christian tradition, the person's very first cross pendant is presented to him/her by his/hers Godparents on the day of his/her baptism. Baptism signifies the receipt of God's blessing, and with that blessing, the person being baptized is assigned a Godfather and a Godmother, whose primary responsibility is to oversee moral and religious upbringing and maturation of their Godchild. Orthodoxy does not impose strict requirements on the design of the cross, because it honors the actualcross and not any particular style of craftsmanship. What does matter, however, is that at least one of the cross's lines be divided exactly in half. So, when studying the manufacturing of crosses, one should not look for stylistic differences, but rather pay attention to artistic idiosyncrasies inspired by the traditions of any given Orthodox country. 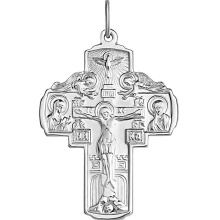 As a general rule the symbols and the inscriptions on Russian Orthodox crosses are far more diverse than on the Latin ones. The examples of such inscriptions with English translation are listed below:
IНЦI / INRI atop the cross (acronym for Church Slavic 'Іисусъ Назарянинъ, Царь Іудейскій' / Latin: 'Iēsus Nazarēnus, Rēx Iūdaeōrum' / English: 'Jesus the Nazarene, King of the Jews'). It gives the historical background for the crucifixion ordered by the Roman prefect of Judaea Pontius Pilate; ЦС: Царь Славы (Russian for 'The King of Glory'); IC XC signifying 'Іисусъ Христосъ' (Russian for 'Jesus Christ'); NИКА (derived from the Greek verb nikē or conquest). This word is reminiscent of the Appearance of the Cross with the inscription 'In this sign thou shalt conquer' before the Emperor Constantine to signify the triumph of Christ's over death and hell; PHOENIX-bird to symbolize the Sun and an eternal life in the heavenly Paradise; A soaring DOVE that symbolizes the Holy Spirit; The SKULL symbolizes the ashes of Adam, the First Man, and the Progenitor of the Human Race. According to a legend, the skull at the base of the Cross is that of Adam and the blood shed by Christ over it had cleansed the humankind of sin and brought it salvation; СПАСИ и СОХРАНИ (Russian for 'Protect and Save' [me, oh my God]) to ward off the evil eye and to dissolve negative energy; CIRCLE - the circle behind the cross represents the crown of thorns that the Roman legionnaires placed on the head of Jesus and symbolizes an Eternal life; TREFOIL - the tips of the crossbars of the Russian cross are made as a trefoil to symbolize the Holy Trinity: The Father, The Son, and The Holy Spirit; DIAMOND - a diamond, mounted atop a cross, symbolizes the tears of the Virgin shed when her son Jesus was crucified; К, КП, КОПИЕ (Russian for 'Holy Lance') - denotes lance of the Roman legionnaire that pierced the body of crucified Christ; Т, ТР, ТРОСТЬ (Russian for 'Cane') - a cane topped by a vinegared hyssop sponge denotes weapon used to torture Christ; МЛРБ - Russian acronym for 'Executioner's place is become paradise'; СНЪ БЖИ, СНЪ БЖIЙ - Russian acronym for 'Son of God'; MP OY means: Virgin Mary - Mother of God; ГГ - Russian acronym for 'Golgotha mount'; ГА - Russian acronym for 'Head of Adam'; PRAYERS - in rare cases (due to the labor intensity of the process), the beginning of a prayer may be engraved on the back side of a gold or silver cross pendant (see right picture). Such Eastern crosses are both beautiful and helpful, because they enable the wearer to remain in a continuous spiritual unification with God.

Patron Saint Icon Pendants and Guardian Angel Medals. In addition to cross pendants, Christians are known to wear such charms as icon necklaces bearing the image of their particular patron Saint. Wearing the images of saints is a pious tradition that takes roots in Byzantium. A revered and sanctified icon is believed to carry the Divine grace coming from the God to sanctify a man and keep him safe from harm and evil. The believers feel empowered by the image of the saint as they turn to him in prayer. In Eastern Orthodoxy, the most highly esteemed icons are those depicting The Holy Virgin Mary - Mother of God. These icons can be classified into several types based on the details of their execution. The icon necklace shown here depicts Christ as an infant who is snuggling up to His Mother by brushing Her face with His cheek. This type of icons is called 'Panagia Eleousa' and not only represents a Mother's love for her Son, but also symbolizes the man's love for God and the God's love for man.
The Holy Scriptures are teaching us that apart from the physical world there exists a great spiritual world, the abode of intelligent and kind creatures called the Angels. The word 'angel' means 'herald' in Greek language. The Holy Scriptures refers to them this way because they are the messengers of the God's will. The prefix 'arch' signified that some of the Angels are more significant and their mission is more sublime.